An urban decay themed senior session in an abandoned warehouse, with an intensely creative young man… this shoot was soooo much fun!

Nathanael is always making something, be it a script, novel or drawing– he keeps his sketch book on hand at all times.  He is inspired by films and gaming, so I knew I wanted to capture the same surreal, story-driven feel during  his portrait session.   From the moment he described the dark, detailed slant of his artwork and suggested an abandoned warehouse for his location– I knew it was going to be an awesome experience.

Nathanael specifically wanted dark, creative images and chose a location and wardrobe that went wholeheartedly in that direction.  That enabled me to dive in, so there was no limit on what I could produce for him.  I love the open-endedness and sense of mystery that these images have.  This portrait session is not exactly about what Nathanael likes or who he is now, but rather to show the creativity of his perspective, his abilities and his potential.  I tried to take all of the abstract pieces that I picked up about Nathanael and turn them into something tangible, and these are my results. 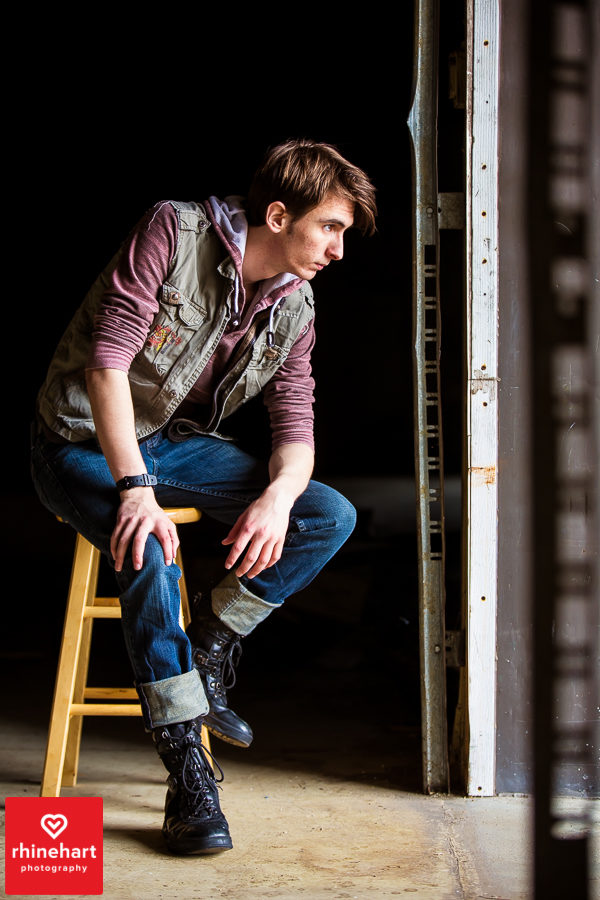 ^ Nathanael spends a good amount of time on his computer daily.  Typically he is reading and learning, delving into his current topic of interest (frequently related to arts or entertainment).  He listens to a bunch of podcasts and watches YouTube.  Recently he’s been getting into Chris Hardwick’s “Nerdist”

I wanted this to show a softer, more sensitive side of Nathanael, but keep in step with the dark, shadowy theme (above).  (Below) Nathanael is an incredibly talented artist.  Most of his drawing is character design and concept for whatever he is working on.  The visual really helps him to write authentically.

(Below) I love how Nathanael in reality is leaning away and avoiding eye contact, while his reflection confidently stares me down.  Again this image is surreal and mysterious, it hints at the future, or possibilities.

These images just felt right to me, they pulled in the action and adventure of gaming, and left the plot itself open to interpretation.   In Nathanael’s words, “This portrait shoot is really hints of a story, it allows you to fill in the blanks and create your own.  I could easily use these photos as inspiration, and write them into so many different situations.  ”

I wanted a sense of mystery and movement to these shots, hopefully that comes across in the images above.  I also wanted to show the juxtaposition of his relaxed, creative side that appears to be 0n-the-run and his academic/professorial side (and look) that appears much more grounded, but still has that spark of eccentricity.

Segmented– what I like most about the image above is that it shows Nathanael compartmentalized– his mind separated from fragments of his body.  During our initial meeting, Nathanael mentioned being contemplative and introspective and shared that he tends to over think things, so I think it really fits.  I like how the next image has lines going in the opposite direction and rather than his body being divided, he is in shadow, with less than a hint of his face.

Nathanael is going to school for film design, and I love his wardrobe!  He thought first about the location, and pulled clothes that he felt would interact well with the setting.  (That is a great idea for those of you who have upcoming shoots with me!)  His wardrobe was a mix of current pieces (H&M) and lucky thrift store finds.  (He was voted “best dressed” in his high school 😉 ) and is known for putting together random pieces into cohesive outfits with character.

Final thoughts from Nathanael, “I can use these images on the website I’m creating or in my upcoming career in film… they really show versatility and depth, and are more suggestive than obvious.  I had a lot of fun during the session.  We communicated so well, and Lisa really “got” me and the look I was going for.  I was incredibly comfortable in front of her camera and I couldn’t be happier with the results.  They are awesome.”

Nathanael will be studying film design in the fall and I wish him all the very best at UVU!

To see more from his family, you can view his sister, Hailey’s senior portraits here and their family photos here.