Betsy was first introduced to me by her friend, Kyle, whose wedding I photographed at the Carnegie in DC last year.   His rave reviews encouraged her to take a closer look at my work and my personalized, friendly approach and eclectic style sealed the deal.

We were a perfect fit!  They were looking for photos that could capture the classic, timeless elegance of their bespoke St Regis Washington DC wedding, while also bringing in a creative eye that would result in photographs that are artistic and unique.  I set out to do just that for them.

Everything at The St. Regis Washington, DC  was impeccable under the thoughtful direction of Martin Keeny and his team.  The venue was stunning and the service exceeded expectation.  More about this later…

Betsy is a beautiful person inside and out.  She is intelligent, thoughtful, humble and kind.  I captured many photographs of Betsy on her wedding day, but I am drawn to this one because it captures so many of those elements.

It really gives you a feel of not only what she looks like but who she is. 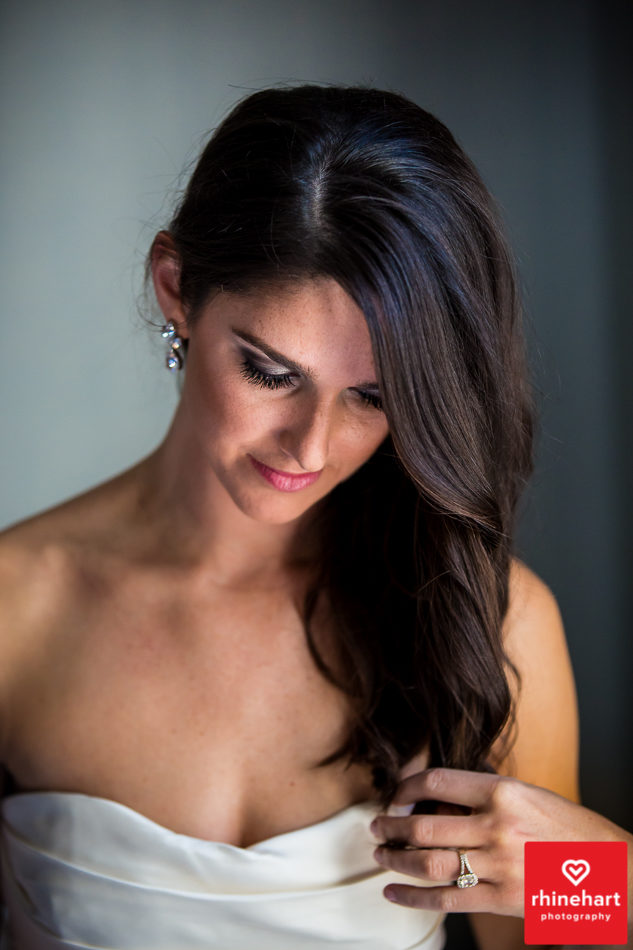 While I love capturing personalized wedding portraits, I also enjoy capturing those unexpected candid moments that occur on the wedding day.

Betsy’s mom to the rescue…

As Betsy’s mom was fastening Betsy’s gown, the top hook came undone!  Fortunately her mom is the daughter of a tailor and learned how to sew from him.

She came to Betsy’s aid calm and collected, armed with needle and thimble in hand.  The thimble was purchased by Betsy’s grandfather from Tiffany’s and given to her as a child.

Her efforts were successful and Betsy shared that her late grandfather would have been so proud of her mom and that he was definitely there in spirit.  🙂

Here are the beautiful women that Betsy chose to have by her side on her wedding day.

I wanted to capture them in soft, warm natural lighting while also giving a sense for the architecture of the St. Regis Washington DC.

Betsy first fell for Evan’s positive attitude and high energy, his quick-wit and ability to stay calm under pressure and the way he is always able to make her laugh and smile.

Evan’s lively personality is appreciated by everyone around him, as you can see below.  He is also a runner, which is part of why this next image is so fitting.

The slow shutter speed used here gives a sense of motion, joy & spontaneity .  Betsy I hope this makes you smile!  (Evan is on the right in sharp focus):

The men’s photos were taken in President’s Park in Lafayette Square.  Yes, the St Regis is a mere two blocks from the White House.  I love a classic tuxedo– looking dapper, gentlemen!

Evan and Betsy’s first look took place in the exquisite lobby of the St Regis.  Here Betsy waits for Evan at the window.

I was able to capture three images of Betsy in this one photo.  I like how this photograph is able to bridge the gap between so many of Betsy & Evan’s favorite images.

Evan shared that the first look was by far his favorite part of the entire wedding day!  He said that the emotion and suspense he felt right before he saw her was much more dramatic than he had imagined….

When he saw her, he was completely overcome with joy and couldn’t have imagined a more beautiful bride!  He shared, “She was elegant and stunning and I could not wait to marry her!”

The St Regis was incredible to work with on a number of levels.  It was not only exquisitely beautiful, but the service provided to the bride and groom well exceeded expectations.

Betsy, Evan and I were allowed to explore the hotel and take advantage of any spaces that I found inspiring.  I noticed the incredible walk-in wine cellar below.

Accustomed  to halting the creative process to seek (and hopefully obtain) permission,  I asked a waitstaff member walking by if we could go inside for a photo or two.  I was fully expecting him to need to speak with a manager and cut red tape, using up a great deal of our photography time and putting a damper on the couple’s natural, candid emotion, etc.

He immediately responded, “Of course, go in, it is your wedding day!”   We snapped this unique photograph:

Betsy fell in love with the elegant lobby and envisioned one of my signature editorial-inspired bridal party portraits taking place there.

Event Manager, Martin Keeny assured her that he would reserve the space for 2 hours so that we would be free to use it at any point during the wedding day portraits.

Having worked in a number of hotel lobbies previously, I was a bit apprehensive about our ability to tweak furniture placement and arrange proper lighting while also avoiding accidental “photobombing” while also keeping the entire bridal party posed, focused and embracing their inner model as guests and staff traversed the lobby.

Thanks to Betsy & Evan’s amazing bridal party and the cooperation of St. Regis Washington DC, I was able to create this classic portrait of the entire bridal party!

Betsy and Evan’s wedding ceremony took place in the Astor Ballroom.  The lights were up as the guests took their seats and as the procession became the room lights were dimmed while the aisle and altar was illuminated.  There was an audible collective gasp in the room when it occurred.  Absolutely breathtaking!

Wedding officiant, Clare Palace, quoted Supreme Court Justice Kennedy stating, “No union is more profound than marriage for it embodies the highest ideals of love, fidelity, devotion, sacrifice and family. In forming a marital union, two people become greater than they once were.”

I tried to capture the physical space as well as the emotional sentiment as well.  This is my artistic interpretation.  No I did not use Photoshop.  😉

This music-loving couple exited the ceremony as husband and wife to a harpist from Washington’s Best Musicians playing “You’re My Best Friend” by Queen.

As soon as the ceremony ended, hotel staff along with florists from the incredibly talented Blue Vanda Designs began transforming the Astor Ballroom from ceremony space to reception venue.  Thousands of fresh roses fragranced the lovely space.

No matter where Evan is or what he is doing he is always cracking a joke and having a good time.  His wedding day was certainly no exception.

I think this photo captures his spirit perfectly– I love that the groomsmen are cracking up in they background, this was just so “Evan!” they said.  🙂

The speeches had all the guests applauding and laughing out loud.

Jennie, a divorce lawyer in Chicago, drafted a contract for a successful marriage for a change of pace, haha!  She read it aloud and offered heartwarming advice while also poking fun at Betsy’s cooking inability and Evan’s golf obsession.

Chris had the unfortunate fortune of having to follow Jennie’s speech, but held his own, remarking on his relationship with Evan and how Betsy managed to steal Evan away and grow into Evan’s new best friend and how happy he is for both of them.

The evenings entertainment was provided by the band Amaretto, which featured talented vocalists and a full horn and rhythm section.

Betsy & Evan love music and having an amazing band was such a perfect fit for them:

Needless to say, Amaretto kept everyone out on the dance floor!  Great use of those Wedding Wire shades, guys!

Everyone had an incredible time, but probably the most memorable dance floor moment for me was at the end of the night when Betsy’s 92 year old grandmother was rocking the dance floor, wheeled by Betsy and Evan.

I knew how important Betsy’s grandmother was to her and spent as much time as I could snapping photos of her throughout the day, I had never expected to catch a moment like this!   Incredible!!!!

Before I began to pack-up for the night, I asked Betsy & Evan if there were any photos that we missed earlier that they would like me to snap quick before I headed out.

They said yes, and I figured it would be a friend or family member, but they said they would like a photo with *me.*

What can I say, Betsy and Evan you are awesome.  🙂   Thanks for choosing to have me by your side for your wedding day.  It was both an honor and a pleasure and I am sure that you both have many happy years ahead of you!

I love unique and modern photos.

[…] shared, “We first found Rhinehart Photography through the recommendation of friends (Betsy & Evan: their St Regis DC wedding blog is here), and immediately liked Lisa’s style. After our first meeting, we knew that Lisa would be […]