Noah and Patchie reached out to me looking for a wedding photographer who would be able to capture all of the diverse elements of their wedding day.   They wanted everything from the candid emotion (which you can see in the image above), to the architecture, to traditional portraits, to all of the unique wedding day details to be captured artistically using careful exposure and composition.

They were also looking for photos that specifically fit them and their style,  and liked the way that I take time to get to know each couple and really capture their personalities and personal style in their photography, rather than taking more of a “cookie cutter” approach.

Patchie shared that she loves looking at beautiful wedding details on Instagram and that it’s often the first thing that she does in the morning.   I utilized this light fixture in her bridal suite to bring in the light and airy pink tones that she loves so much and marry it with Noah’s love for modern lines and architecture…

I used a shallow depth of field and the soft, organic lines of this upholstery to capture more of their wedding day aesthetic.  A formal elegance that is warm and soft. 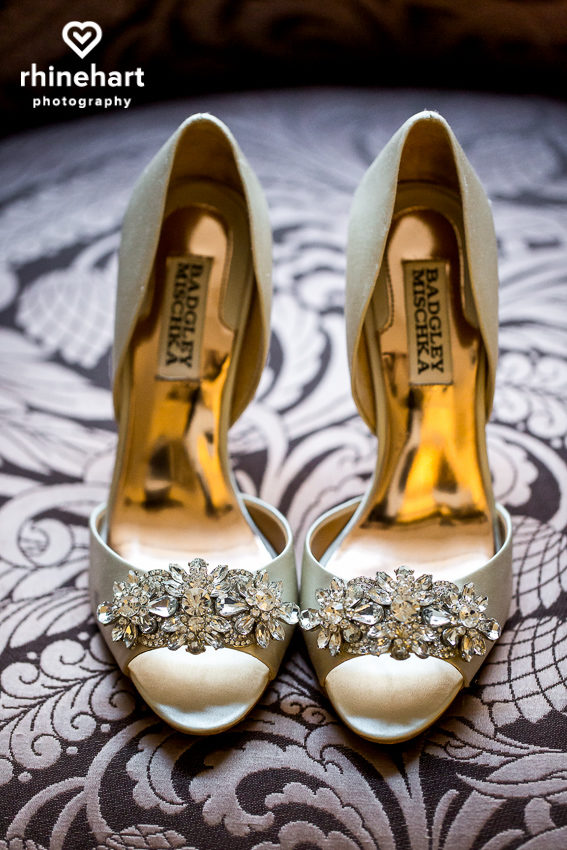 She chose a Nicole Miller dress from BHLDN in Georgetown and a soft, pure mix of  white and cream roses and wore her hair down.  Patchie, you are stunning!

Here Patchie’s mother and her maid-of-honor assist her with her cathedral-length veil.

Noah shared that Patchie has the most resilient, positive spirit of anyone he’s ever met.

He said she is gorgeous– fun, affectionate and strong.  He said he looks up to her, despite the fact that she is a foot shorter than him ;).

I really like how her strength and confidence comes across in this image:

We were gifted with a 50 degree day in January, which was a real blessing!

We headed outside for several portraits– I found this lovely ivy covered wall that had just the simple, organic aesthetic that Patchie would love!

It was still on the chilly side for the ladies, but they were total troopers and rocked it, keeping cheerful and just having fun!

Patchie had each bridesmaid select their own black floor length gown to wear and was very happy with the results!

Here they are ready for their editorial spread in Vanity Fair…  😉

While the ladies finished their preparations, Noah and his men dressed at the Melrose in Georgetown.

Here Noah’s best man stands on a chair to reach his 6’3″ frame and tie his bowtie.

I like the high contrast, clean, crisp lines and the fact that that Georgetown architecture can be seen through the window.  It gives you a sense of space and gives a nod to Noah’s architectural background.

Patchie shared that out of all the fish in the sea she knew that she had found “the one” in Noah.

She shared that he brings out the best in her and is her number one supporter.  He inspires her to be a better person everyday.

I really like this photograph accompanying that sentiment, because you can see his friendly, positive attitude and you can see Noah in (Patchie’s) sharp focus, while everyone else in blurred in the background.

The Beatles, Abby Road was the inspiration for this next photo:

Noah’s best man and officiant were his roommates and crew-mates throughout his time at Georgetown University.  It was fun and nostalgic to walk to Thompson’s boathouse after so many years.

Noah was excited to capture the vistas along the Potomac that were so familiar to him from rowing crew throughout college.

Noah is undoubtedly fun and spontaneous.  He said being together with his best man and having all of his groomsmen together in one place brought out the prankster in him.

They decided to try to get on the ice during a lull in public skating time at the Washington Harbour Waterfront.

Security denied their requests to take a quick ride on the zamboni so they decided to flash mob the rink and hopped the glass, doing a quick conga line.

Funny enough, later that night at the after party at Mr. Smith’s, a couple from the Waterfront that morning recognized them and bought them all a round of drinks!

After their ice rink escapades, it was time to get serious and see his bride for the first time. 😉

Noah said going into the “First Look” he was worried that the cold and weight of the day might have dampened her mood, but she was so happy and full of life that it was one of his favorite moments of the entire day.  He said he will never forget her smile.

Patchie shared that she thought Noah looked so handsome and she was so excited and felt incredibly fortunate to finally be marrying the man of her dreams.

I like the image above because the wind was quite active that afternoon and carried Patchies veil wherever it pleased.  For this moment, it held it right behind her drawing all the attention at Patchie & Noah’s sweet expressions.

I like the image below because it captures this sweet couple enjoying a moment alone.  It also shows how lovely and green the Four Season’s Hotel Washington DC courtyard was, even in mid-January!

DC architecture brought Patchie and Noah together, as they were both involved in work at the Arlington Tower.  I wanted to involve the clean, modern architecture of the Four Seasons Washington DC as much as possible.

Here they are descending the window-lit staircase.  I think the look of it compliments their wedding style so well!

Patchie and Noah met in northwest DC and capturing that Georgetown environment, especially the canal was something that Noah was particularly excited about.

This photo captures the intertwining of built and natural environments and exudes the classic, simple feel of the Georgetown that they know and love…

Patchie shared that Noah encourages her to step out of her comfort zone– I can’t think of a more fitting image!

While I love capturing natural images that are more photo-journalistic like the photos above, I also make sure to capture more traditional portraits of the couple, their families and the bridal party as well.

We found inspiration from photo spreads in Vogue magazine for this editorial-style bridal party photo.  It showcased each of their individual personalities, while capturing everyone in one single image.

Let’s be honest, you guys totally nailed this!

She worked with EDGE florist whose flawless execution brought her vision to life.  She collected various decor items from Etsy, Nordstrom, even Target ;).

The string quartet provided a beautiful start to the *candlelit* wedding processional.

Noah was overjoyed to see Patchie.  He said, she looked like an angel, his angel.  🙂

The ceremony was lead by one of Noah’s best friends, so it was very personal and spoke to their hearts.

Their vows were the same.  Noah, who is admittedly the more sentimental one said he had to practice saying the line, “she always leads me to a better place” so that he would be able to say it without choking up.  😉

The entire “Season’s” restaurant in the Four Seasons Washington DC was reserved for their private party.  It is a pretty space with neutral, beautifully lit artwork on the walls, a perfect backdrop for Patchie & Noah’s personal style!

Table numbers were hand-scripted on wooden blocks.  The centerpieces were white roses and hydrangeas in simple, modern vases.   They used house linens and bronze chargers to compliment their aesthetic.

Noah wanted to surprise the guests with some fun dance moves, so Patchie & Noah enrolled in lessons with Pearl from Local Dance pro in Alexandria.

They expected to learn a couple of steps but were totally blown away by having a full lyrical number.  The guests were awed and gasping and classing throughout.

The champagne was sparkling rose with a gold sugar rim (above).  Several toasts were given, but here are photos of Patchie’s maid-of-honor and her father.

If it looks like Sophia is beaming, it is certainly out of joy for Patchie, but also may have something to do with the fact that Patchie helped to arrange her surprise wedding engagement the night before with her now fiance.  😉

Partytime!  Patchie slipped into something a bit more comfortable and she and all of the wedding guests got down on the dance floor.  Here are a few of the photos that I captured.

How much does Noah’s groomsmen look like President Obama?  I had to do a double take, especially since we were in Washington DC and all :).

I mentioned something to Noah and he asked if I had seen his picture on the website, it is Cary with Bill Clinton.  He said that Cary is a diplomat and peace keeper and he would make an excellent president. 😉

I totally did not see this cake smash coming but was poised and ready just in case and wow, Patchie you were awesome!

Noah said since they had eschewed the garter and bouquet traditions he thought this one would probably be coming and if so be at his expense, haha.

And a matter of seconds later– kissing, you’d never know there had been a smash!  Nice pink ombre cake, by the way!

I will end with this, one of my favorite images from Patchie and Noah’s wedding day…

I wanted something that really encapsulated so many of the elements that they were looking for in their wedding photography: creativity, emotion, architecture, romance and threw in a bit of drama to boot!

Patchie and Noah, thanks so much for sharing your story and choosing to spend your wedding day with us by your side.  I hope that these photos capture your sophisticated style, your warm, loving personalities, your venue and your friends and families for you and your loved ones to enjoy for years to come!

If you want to see more of Patchie & Noah, check out their colorful DC engagement here.