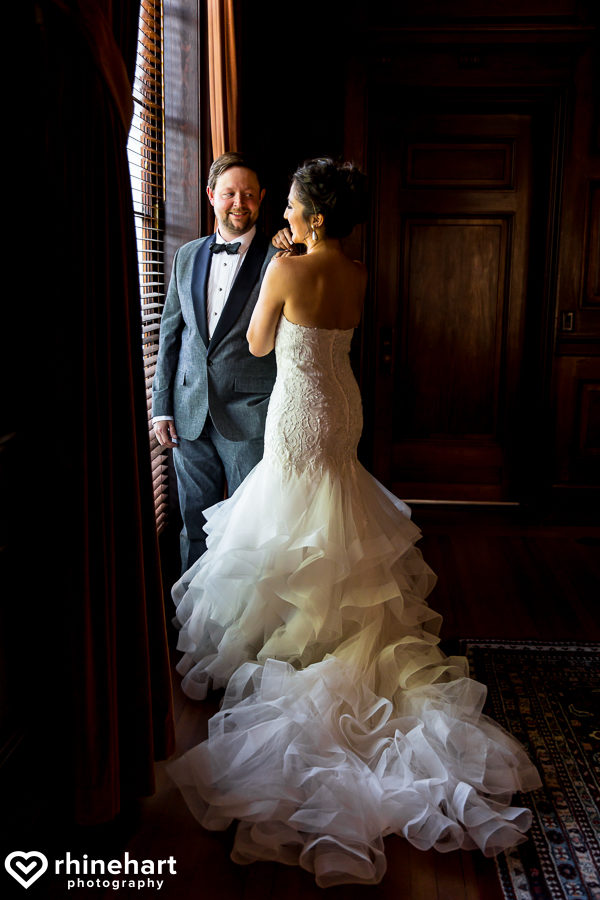 Courtney and Evan first saw my photography when they were touring the Carnegie Institution for Science.   She said after seeing a few of my photos, they were hooked!

They loved the way I used lighting and my ability to capture those candid, emotional moments.  She also liked the consistent quality of my photos from group portraits to the smallest wedding details.

Here are a few of their wedding details…

Courtney’s bridal party was joyful, supportive, witty and fun-loving– they are hands-down one of my favorite parties to work with to date!

Courtney’s bridesmaids chose their own black floor length gowns and shoes.  She wanted their look to be timeless, elegant and practical.

Each woman felt beautiful in her gown and could totally wear it again.  her maid of honor pops in her black lace gown.  Gorgeous, ladies!

Off to the Carnegie Institution for Science for the first look!

They initially were drawn to the Carnegie because of it’s classic Washington DC feel  it projects, with its marble columns and sense of grandeur…

It also has more intimate spaces inside, that while incredibly luxurious, also have a more private size and feel.

While the ladies prepared for the wedding the men gathered for preparations of their own.  They were both at the Hotel Rouge, just on different floors.

It is a great hotel to use for preparations for Carnegie weddings as it is always distance from the hotel and the decor is interesting and allows for me to get creative.

While the painting on the wall is about to dive in, Evan dives into his wedding day preparations by dressing Deion in his tux and giving him a good belly rub, haha!!!

Evan was ready to see his bride for the first time!

They chose to have a first look so that they could spend the cocktail hour with their guests and complete all of their romantic and group photos prior to the ceremony.   Their day flowed nicely: from preparations, to seeing each other, to seeing their friends, to seeing their family, to exchanging their vows to celebrating…

Ready to see his bride…

I chose the boardroom for their first look.  It was stately and fit their timeless feel and also provided a simple dark background that drew all of the attention to them and their lightly colored garments.

Courtney walked up behind him, beaming…

Evan shared that when he saw her she looked incredibly beautiful, but that his favorite part was how happy she looked.

Courtney shared that he looked so handsome…

When we initially talked, Courtney & Evan shared that they have very few photos of the two of them together and that it seems to be hard to find one of them that they both like.

We explored outside of the Carnegie as well.  I love this shot in black and white– you are really able to see all of the exquisite detailing and even read the engraving…

The pretty orbs floating into this image were caused by sunlight reflecting inside my camera lens.  I think they are beautiful and add a real element of emotion to this image…

I like playing with light– for this next photograph, I focused on the shadows created on the marble steps.

We headed inside for some family photos in the library…

Courtney was greeted by a surprise visitor– her mom’s expression is priceless!!!

Courtney & Evan’s dog, Deion, played an important role in their wedding and in bringing them together as a couple.

Early in their relationship, Evan realized that animals were important to Courtney– she volunteered at shelters and Evan thought he’d impress Courtney & visit a shelter with her.

Little did he know that he would leave the visit with a dog.  Deion wiggled his way into Evan’s life, showed Courtney Evan’s huge heart and eventually helped win her over on behalf of Evan.

Evan and Courtney chose to have Deion at their side on the wedding day and bought him a tiny tuxedo.

Courtney said it was only fitting to give him an important role.  He was their ring-bearer during the ceremony!

There are several photos for the bridal party, but this one is totally my favorite.  I told you they were a lot of fun!

The wedding ceremony site was gorgeous– the room was set with gold chiavari chairs and bronze vases overflowing with lilies, roses, and hydrangea from Growing Wild Florals.

Guests were welcomed with buttled trays of refreshing sweet tea…

As Courtney’s father escorted her down the aisle and she turned the corner to see Evan, she was filled with emotion.

She said it was as though everything just took a breath for a moment, and you could feel that something new was getting ready to happen.

Here is a bird’s eye view of her father giving her a kiss on the cheek before placing her hand in Evan’s.

You get a good feel for the stately architecture and the sense that they are surrounded by family & friends.

Courtney shared that she was pleased to see Evan so happy.  They are literally both beaming here.

The ceremony was short, sweet and lovely…

I have a close shot of the kiss as well, but I really like this wide crop that shows even more of the architecture!

A stolen moment– when I first met with Courtney and Evan they described a photo of mine that they loved.  It was of a fleeting moment during the ceremony.  She said if I was able to just get one or two shots like that during their wedding day, it would be amazing.

I captured several photos that fit the description, but this one is so tender that I wonder if it might be that shot for her.

The ceremony had just ended and they wound the spiral staircase to spend some time alone before joining everyone at cocktail hour.  I used a slow shutter to capture the motion of them walking and Evan leaned over put his arm around her and gave her a kiss…

Celebrate!!!  This photograph would look incredible in their wedding album.  🙂

Well Dunn Catering provided lovely hors d’oeuvres to the guests while I captured details from the reception hall including the place settings.

Here a navy, sequined tablecloth adds some sparkle to the reception hall…

Guests gathered in the rotunda as the bridal party was announced and the wedding traditions began:

In this next photo Courtney and Evan make their grand entrance surrounded by family and friends.

I love how you can see so many of the guests, the space and the excitement of the happy couple!

Courtney shared that she loves Evan’s sense of humor and quick wit!  She appreciates his positive, level-headed personality and how he always keeps her laughing.

They shared that they are great at being the thing that the other person needs in that moment.

I love the way that the guests literally surrounded Courtney and her father on the dance floor.

I caught their twirl from the balcony as all of their guests applauded– what a moment!

I try to keep an eye on the sunset and noticed that it was going down– Courtney and Evan stepped out on the portico to take it all in.

Courtney mentioned that she really appreciated how easy it was to work with me– there was a whole lot going on during the wedding day, but she said she never felt overwhelmed or that she was being “stolen” from her wedding to take photos.  She was able to enjoy the day and experience it.  🙂   Yay!!!  So glad to hear it!

You two look absolutely lost in the moment here:

Wedding guests packed the dance floor– laughing, spinning, even gathering in the adjacent room for a quick photo.

Everyone was out on the dance floor and let loose– they were so much fun!!!

I love the billowing smoke and glowing embers!

At the end of the evening,  wedding guests lined the stairway (rock concert style– holding their phones up like lighters) and gave them a playful grand exit…

Courtney & Evan, it was such a pleasure to work with the two of you!  I hope that these photos and the hundreds of others that are still coming your way will help you to re-live your wedding day for years to come :).

If you haven’t seen enough of Courtney & Evan, check out a few of their engagement photos here.

« Ranked as one of the Top 100 Photographers in the USA/Canada!!! Carlisle Wedding Photographers: Melissa & Jason at King’s Gap »