A fun, modern Washington DC engagement at the National Gallery of Art… 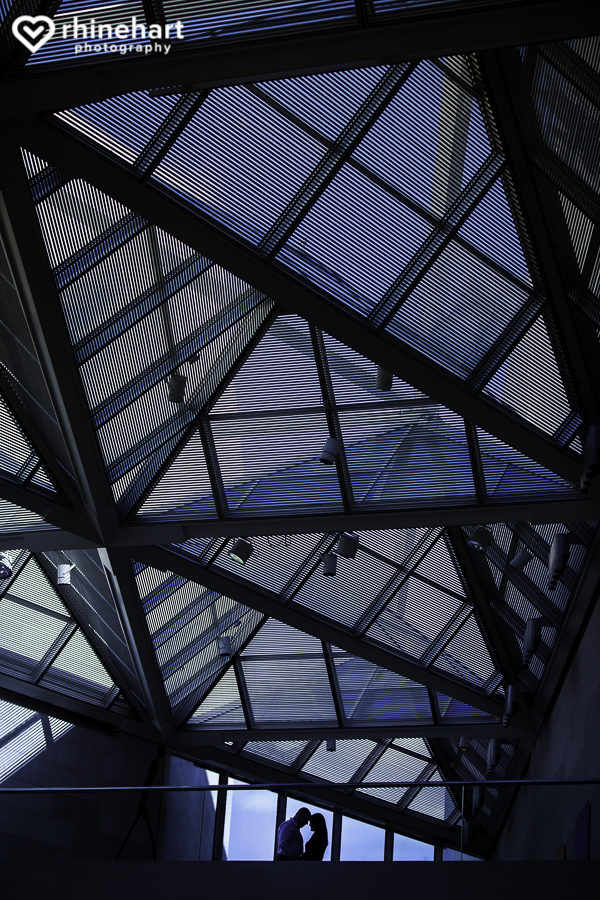 Christine and Alec first came across my photography in the Washingtonian.  She appreciated the style and creativity of my work.  She liked the way I was able to capture an eclectic mix of photos.

While some of my photographs capture architecture, others show creative angles, while others play with exposure.  The image above incorporates all three!

Christine was particularly interested in photos that look natural and capture emotion, but also have an artistic flair.  I think the next image does both. 😉

As Christine and Alec walked outside of the National Gallery I caught this reflection off of the skylight below.

They chose the East Wing of the National Gallery of Art because it showed the more modern side of Washington, DC.

Inside the gallery, Christine & Alec stopped to view some of the art.  This piece is called “Tiger.”  I framed Christine and Alec in the white space as they pondered…

During our initial meeting, Alec shared that while they can both be serious and focused, they also have fun sides, too.

While they’d want some photos to be more chic and sophisticated, they definitely wanted some that just show them being goofballs, too!

Alec and Christine also shared the story about how they first met each other.    Alec said, “We met at a birthday party.  I couldn’t help but notice Christine”.

Alec walked out to the deck with two of his friends, not only to grab a drink, but also to tell them that he’d appreciate them not mingling with Christine– he was smitten.  😉

(In reality I really like the lines, symmetry and  negative space in the photo above, but it is so fitting with the story that I couldn’t help myself).

He spent the entire evening trying to flirt with her, but she was oblivious to his wooing.    Luckily, Alec did not give up that easily…

He arranged for their mutual friend to invite both he and Christine to a music show.  Luckily he did a much better job of wooing her the second time around.  🙂

Christine said that she has come to love, “Alec’s outgoing personality, his sense of humor and his GREAT looks.”  🙂

While we already had a more traditional portrait of Alec and Christine, I wanted something that was a little different, a wider shot that would show more than just their faces.

I noticed this vine growing outside of the National Gallery and could envision the way I could frame both of them between it’s foliage and branches.

Alec shared, “I really love Christine’s nurturing personality, her patience with me, and the fact that she is one of the sweetest people I ever met!”

I think you can see both her sweet, nurturing, supportive sides in this next photo and the way Alec appreciates her.

I’ll end with a photo taken *inside* of an art installation by Leo Villareal.   It is called Multiverse and was created for the underground walkway between the East and West buildings of the National Gallery of Art.

It reminds me of stars and is a bit futuristic.  For that reason I believe it fits the last statement that Christine shared with me very well.  “We are very much in love and looking forward to spending the rest of our lives together!”

Christine and Alec, thanks for opening up and sharing your lives and love story with me.  I absolutely love the new renovations in the East Wing and had a great time working with you two.

I hope that these photos captured your modern, sophisticated style, genuine and fun-loving personalities and the love that you share for each other.  I am looking forward to photographing your wedding next summer.  🙂

For any future clients looking for a great indoor location for your indoor engagement session, I’d highly recommend the National Gallery East.