This well-rounded senior enjoys academics, varsity sports and friends.  Not only does he maintain great grades, but he is a record-breaking swimmer who also works and manages to spend time with his friends.   If there was one word I’d have to describe Matt, it would be balanced.  For that reason, I will start of his set with this image…

Matt knew that he wanted me to be his senior portrait photographer when he saw his upperclassmen friends’ blog posts throughout the years.

He said, “They all had such unique personalities, interesting people who would be hard to capture, but your photos encapsulated them perfectly!  I have been looking forward to you capturing my personality in an artistic way, too!”

We began Matt’s session with a preppy, collegiate look.  He wanted to portray his interest in academics and chose to meet on the campus of Wilson College.

Matt is also very laid back.  His father was in the military and this meant moving quite often, so he learned to make new friends quickly.

I wanted to capture his relaxed demeanor here: 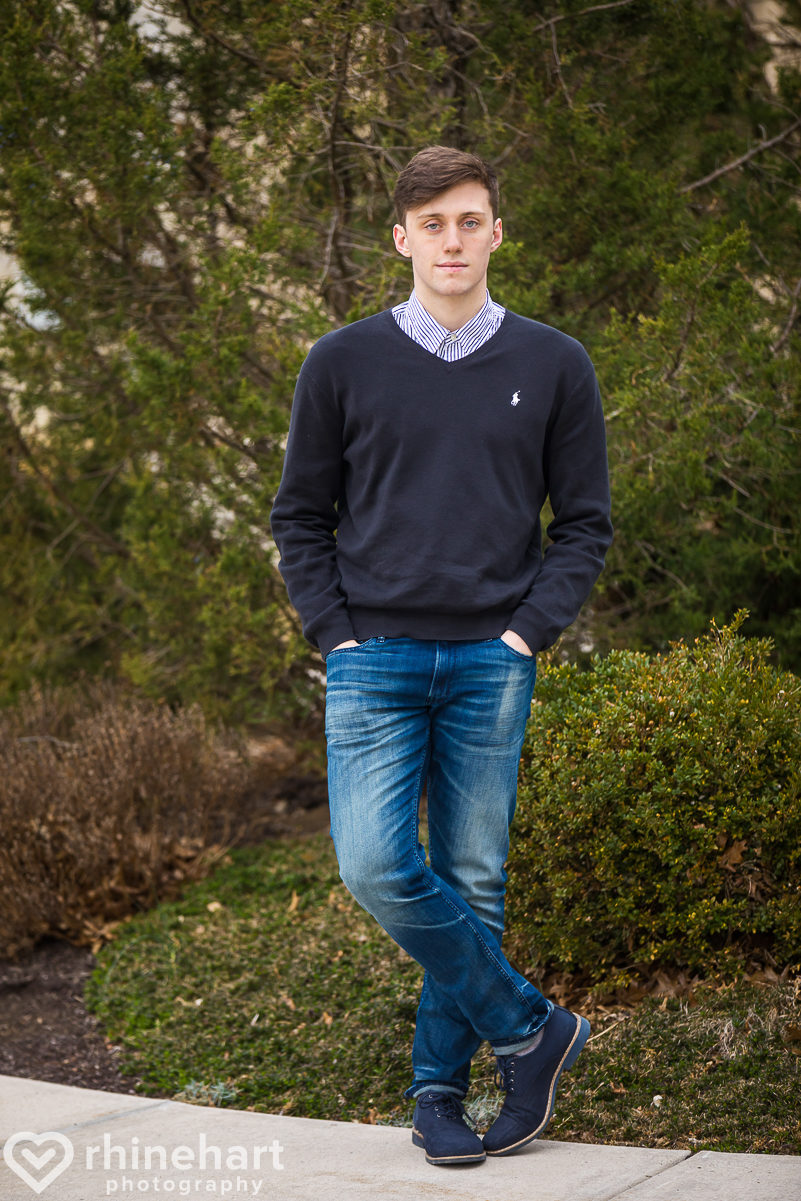 He also has this quirky, fun, playful sort of side, which we will explore later with his “less formal” photos.  Until then I thought this was kind of fun.  Totally his idea!

Matt qualified for districts this year with the Shippensburg Area Senior Highschool swim team.  He earned his personal record in the 200 IM and was a member of the school record breaking 400 freestyle relay!

He briefly considered using the natatorium for his senior portrait session, but decided he preferred a more figurative swimming reference.  (By the way if anyone wants a session in the pool, I would *love* to do that!)

Matt chose to incorporate water into his session.  Here he stands along the banks of a stream.  I like how you can see the reflection of the trees in this photograph…

I really love to capture reflections in my photography– if you look closely in the water you can see Matt’s profile reflected.  Do you see it?  Matt is in the water, haha!

The second part of his session showed a more relaxed, spontaneous side of him.  He wore a hoodie and sneakers and rather than using the archways of Wilson College, we went for a more “back-alley sort of vibe.  Here he is walking on a wall…

He mentioned that he is a fan of street-ware and that these “Supreme Vans” are one of his favorite pairs of shoes.

Here he is listening to some tunes on his phone.

I liked the lines and angles here.  It is casual yet strong.  I think it fit’s Matt well!

Here he is being a little spontaneous, just hanging around…

We played around with some shots with Matt’s hood up.  I think it looks super cool…

I used steel beams from the fire escape to give this image a really modern feel.  I like how they make a z!

I really liked this staircase and how you could see it from outside of the building!  If you look closely you can see Matt skipping a few stairs…

Matt, thanks for following my work for the last few years!  It was a pleasure to work with you and I hope that I captured your personality in an artistic, creative way!  Please share this post with friends and family on social media :).