Zeena laughed, “Funny story– Felix and I had actually already chosen a wedding photographer right before we met with you, but I felt rude canceling our meeting!  Then when I saw the full galleries of your work, and we saw your documentary style and high-quality, crisp photos (we both knew we didn’t want that light-airy look) we ended up pivoting & hiring you.  I liked how you captured emotions and I also loved your vogue type photos, too.”

A little documentary style for you…

When we first talked, Zeena explained being drawn to my use of color, saying if the sky is blue, I want it to look blue in my photos.  She also mentioned wanting a good mix of traditional portraits and candid emotions as well as the importance of having a tangible wedding album.  Their package includes a wedding album, and they had the most incredible blue sky evening mixed with golden hour, it was like shooting in a rainbow, an intense blue storm behind us and beautiful golden light in front as the sun set, and fun pops of pink in the space between!

While I opened with a more fun/emotional shot that showed off their personalities and the location, this next one is a more traditional portrait, but modern with the crisp focus, and with that blue sky pop! 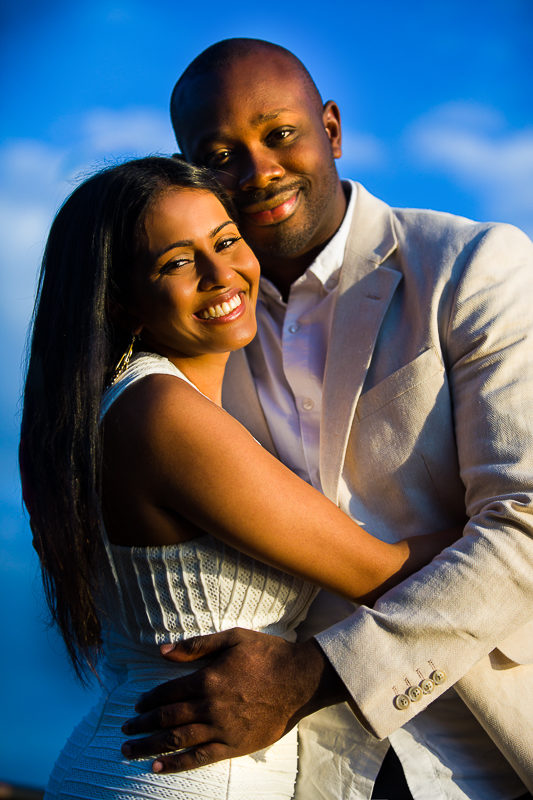 Speaking of color…  honestly, these are just a mix of wildflowers and weeds growing along the river bank, but the wildflower blooms combined with the light of golden hour were so magical!  Combine that with the love of these two and, wow…

Zeena explained, “Our venue is barn-style so we wanted a different look for the engagement shoot.”

The Walnut Street Bridge was another really cool visual element.  It’s the pedestrian bridge that connects Harrisburg to City Island.  The lines of the bridge combined with the blue sky and incredible light on the couple and their wardrobe and emotion– everything just came together so well here!

He fell for her in anatomy class…

Felix explained, “We were in anatomy class together, she wore sweatpants and a school-spirit hoodie every day– I thought she was beautiful.  She would ask if she could play with my phone while we sat in the back of the class, and I obliged.  She didn’t know it, but she had me when she asked for my phone the second time.”

Awww all the joy…

Zeena brought some chalk bombs to amp up the color, I really loved them!

With golden hour in front of us and a storm behind, it was like shooting in a rainbow, all of that was magnified by the water!  Add in the lines of the steps and ripples of the water, a beam of light shining right on top of her ring, it was pure magic!

You can feel the connection…

Felix continued his story, “She moved away to Pennsylvania but somehow we connected after some time apart. I would visit her traveling several hours each way, long-distance made it hard but also made you feel it was worth it.”

Felix added, “During our long-distance relationship, I made her laugh and massaged her feet, I think that’s when she fell for me.”

I noticed this cool artwork when I parked and when I saw Felix’s socks my mind was a little blown, we went back there at the end of the shoot and got this:

Felix shared, “Our most trying time was when she studied to become a nurse practitioner. It was a hard three years and I would stay up late helping her studying or helping her with her papers. Towards the end of her studies, I told her I had done most of the work lol. In fact during her honors ceremony, where she was top two or three in her class, when they called her name I stood up because I felt they were calling my name too (true story).”

Felix smiled, “Don’t tell my friends this, but I actually kiss Zeena nearly a hundred times a day, sometimes much more.”

Felix shared, “She is always laughing and smiling even after 9 years together we still have the same attitude towards each other, we are still in that honeymoon phase and hoping it will never change.”

With this photo, I was trying to capture the way love *feels*

Sunset: two are one…

Felix explained, “I would say I’m the thinker in the relationship and she is the social one, we improve the worst parts of each other and enhance the good parts too. We travel the world together and enjoy each other’s company.”

I love how you have to look close to find them, and when you do it’s hard to make out who is who.  This would look awesome on canvas!

Zeena shared, “We spent 3 weeks in Asia-Vietnam, Cambodia, and Thailand. I had planned most of the trip and right before we went, a friend of mine was like you probably are going to get engaged and I replied “definitely not, I planned most of this trip.”

Zeena smiled, “I’m usually the one with the surprises, but Felix really got me with his proposal.  Between all the flights, amazing adventures, intense heat, I never, ever thought of getting engaged! We were both just so focused on all of the activities we had planned, at least I was.”

She continued, “Three days before the end of the trip, we were snorkeling on the Phi Phi islands, a trip Felix planned.  The boat driver mentioned he was going to take photos and a video, which seemed odd.  But I soon became distracted as I’m not a strong swimmer, Felix helped me navigate the whole snorkeling thing.”

A few stops later, the guy was taking a photo of us, and then I turned to look at Felix and he was proposing!”

Also surprising, these color bombs– they were fun and added a lot to the shoot!  Highly recommend 🙂

Felix smiled, “I would say I’m the thinker in the relationship and she is the social one, we improve the worst parts of each other and enhance the good parts too. We travel the world together and enjoy each other’s company.”

They both have the most beautiful smiles!

I LOVE their style!  The colors were neutral enough that we could use so many backgrounds, but the poops of color in the socks and shoes added some fun.  Zeena’s fitted dress had interesting details and Felix’s tailored suit jack dress hit the perfect note of sexy, sweet his jacket was just the right look and weight for summer.

They literally got compliments from several passers-by on how cute they were, haha!

They embraced the photo-session, I had their backs 😉

Zeena and Felix really embraced the shoot and allowed me to capture a full range of emotions.  They laughed and smiled a lot, flirted, they’d also be more serious and quiet sometimes, they trusted each other and trusted me with any ideas I wanted to try and visa-versa.”

I made their engagement session easy

Zeena shared, “To me, the engagement shoot would allow us to feel of what it would be like to have a camera follow us around on our wedding day.”

She continued, “You made the process super easy, it just flowed.”

I love how their silhouettes show off their connection.  It’s had to tell where one person starts and the other begins!  Also, their expressions shine through!

I love all of the textures in this phone from Zeena’s beautiful hair to the tweed stitching in Felix’s jacket… and are those goosebumps, I see on your shoulders, Zeena?  Love it!

Laughter is the best medicine

Hehe, I thought that was a good caption for a doctor-nurse couple ;).

This is probably my favorite shot of the two of them on the bridge– all the color, light, and architecture, yet they are the two that are clearly in focus.

And this, my friends, is why I love shooting in golden hour– wowza!  That rainstorm provided the intense blues in the foreground, too so we really got the full-color spectrum.

Sunlight and Storms… conveying emotional concepts in an image

A lot of what I do as a photographer is trying to capture an emotion or concept that is more in your heart or mind and showing it to you with your eyes.

For me, this photograph shows balance– that they are together and separate and meet in the middle.  It shows that in life there are all kinds of moments in life– intense storms and romantic sunsets, marriage is a crazy ride that they are committing to each other.  It shows them looking out at what is to come with smiles on the faces and looking towards each other, Felix with his more serious face and Zeena with her beaming smile, each bringing their own strengths to the relationship.

Zeena and Felix, I’m so glad that you met with me, even though you were already pretty decided on another photographer, haha.  Thank you so much for being all-in during your session from the get-go with your cute outfits and color bombs and your openness to my location suggestions ahead of time and ideas on the day of.  You are such interesting people and so in love (after 9 years!), I feel lucky to have been there to capture it all!