A Disney inspired fairytale wedding with a gift delivered via their pet puppy…  Jessica and Devon’s wedding day focused on family, friends and fun.  They have families that share a deep love and joyful spirits and were ready to have a celebration of a lifetime.  Their reception was held at Capriotti’s Palazzo in McAdoo, Pennsylvania, near Hazleton, PA.

Jessica loves everything Disney, her colors were inspired by “Beauty & the Beast” and her dog is even named Simba, after the Lion in “Lion King.”  She wanted to feel like a princess and have a “happily ever after” moment with Devon.  I really think that happened here in the wooded area that surrounds Capriottis.  It felt almost magical, straight out of a Disney movie  :).  I also placed their rings in a subtle Mickey Mouse shape, hehe. 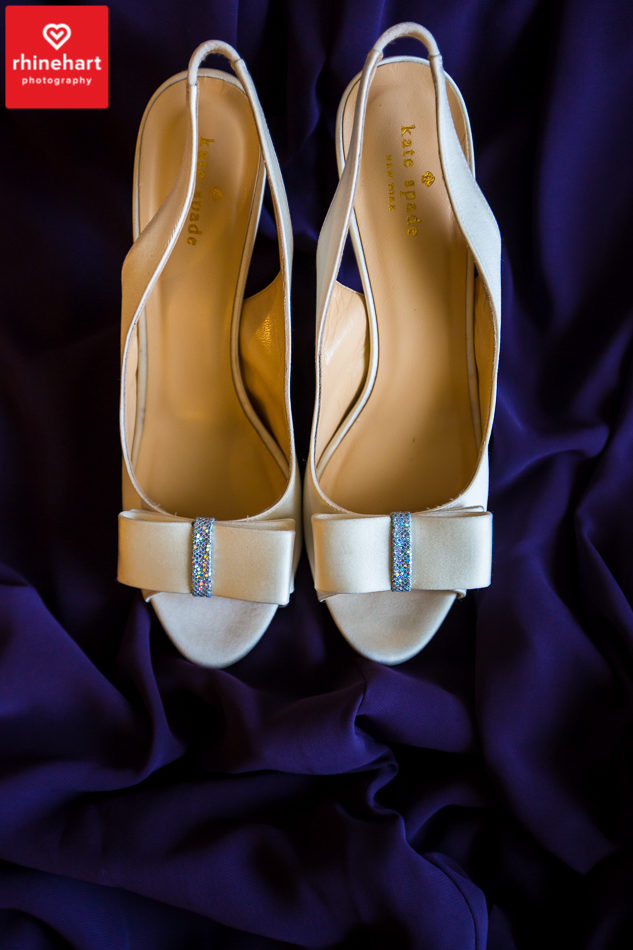 Devon delivered his gift to Jessica via their dog, Simba, who was super excited to see Jessica.  He’s always a ball of energy, but especially when he’s on his way to see “mommy”.  It is hard to tell here who is walking who in the image below, haha and I exaggerated that motion by panning my camera with an open shutter:

This photo of Jessica & her bridesmaids looking at the dress before Jessica puts it on is one of my favorites.  I love the light and lines and that you can even read “bride” across the back of Jessica’s robe.  The image below shows her applying some Dolce & Gabbana perfume.

Another fairytale moment, but this time for the flower girls :).  Jessica has watched them since they were both babies, so though they are technically her niece and family friend, they feel more like little sisters.  They were completely awestruck by Jessica’s transformation into being a bride.

Devon’s godmother, Carol, created the florals for the wedding and has done the same for all of Devon’s siblings.  Jessica was incredibly pleased with the boutonnieres and bouquets, so I made sure to show them off in the photos.

Jessica & her maid of honor have been close since birth, literally, Lizzie is Jessica’s younger cousin and here they are taking it all in together, unable to believe that Jessica’s day is finally here.

Here is Devon looking handsome in his tux:

Jessica & Devon’s ceremony was held at Saint John Bosco in Conyngham, Pennsylvania.  Devon literally could not take his eyes of of Jessica during the ceremony– he was completely captivated.  He shared that watching her walk down the aisle towards him made his nervousness subside and he was just overwhelmed with joy.  He thought is was so sweet at how she was smiling and trying not to cry all at the same time.  He said that she looked like she had stepped right out of a movie and he couldn’t take his eyes off of her.

The Priest gave a very touching mass.  He added in a bit about Jessica and how organized and prepared she was for her wedding day with her binder and everything ready to go.  He gave her back the binder, this time it was empty except for the marriage license.  He encouraged them to put the same amount of effort into the marriage as they did into the wedding planning and to fill it back up.  🙂

A brain tumor claimed Devon’s father’s life, right before Devon met Jessica.   Devon’s brother (the best man) said that Jessica was able to change Devon’s outlook on life after his father’s passing.  With Jessica, Devon was happier, excited for the future and she really took him to that place.  You could tell just how much Devon’s brother appreciated Jessica taking on that role and how much the two men missed having their father present at the wedding.  Here is Jessica’s dance with her father.

A garter toss that resulted in a real-life engagement!!! Jessica’s bridesmaid, Jackie, was very determined to catch the bouquet.  Devon tried to aim the garter at her boyfriend, Mark, but it got tangled in the ceiling draping.  After a display of athletic prowess (leaping, etc. haha),  Mark did manage to reach the garter which you can see in the image above.   Within a month of the garter/bouquet, Mark did actually muster up the courage to pop the question.  Who knows, maybe there is something to the garter/bouquet  tradition.  😉

Jessica has hundreds more images including some very funny dancing photos which she will probably share with you later, but I will end with a final photo of all of the wedding guests at the reception.  I love all the energy and draping and was so happy with the lighting and fitting everyone in!

Jessica & Devon, thank you for inviting me to share your wedding day with you.  It was such a pleasure getting to know you and I hope to see you all again soon!