Nick has always been drawn to politics– by first grade he had already memorized all the presidents(!) it was a real passion for him.  His love of DC and interest in politics has not changed, so what better place for his senior portraits than iconic Washington DC?

I’ll open with the photograph that I call the political trifecta– it features the Washington Monument, Reflecting Pool and Capitol building: 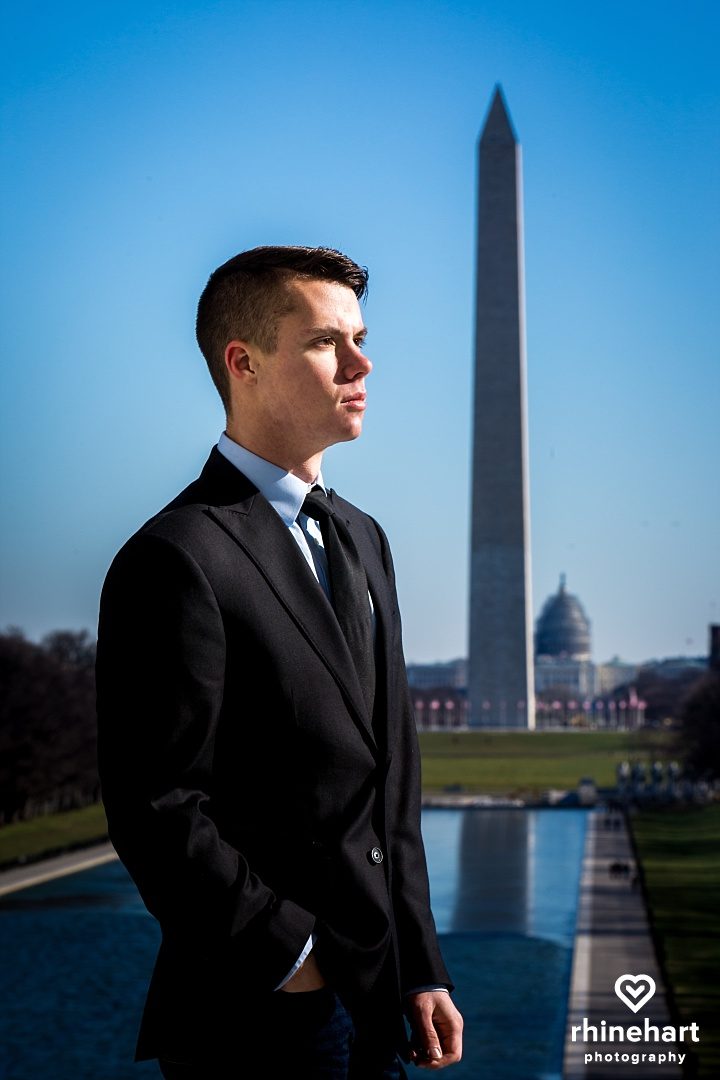 Nick and his family reached out to me looking for a photographer that could creatively capture Nick’s interests and personality.  They had been impressed with seeing photos of Nick’s friends that captured who they were as much as they captured what they look like.

Our first stop was at the World War II Memorial.  His grandfather was in the Navy during World War II and Nick aspires to join the Navy after he earns his college degree. 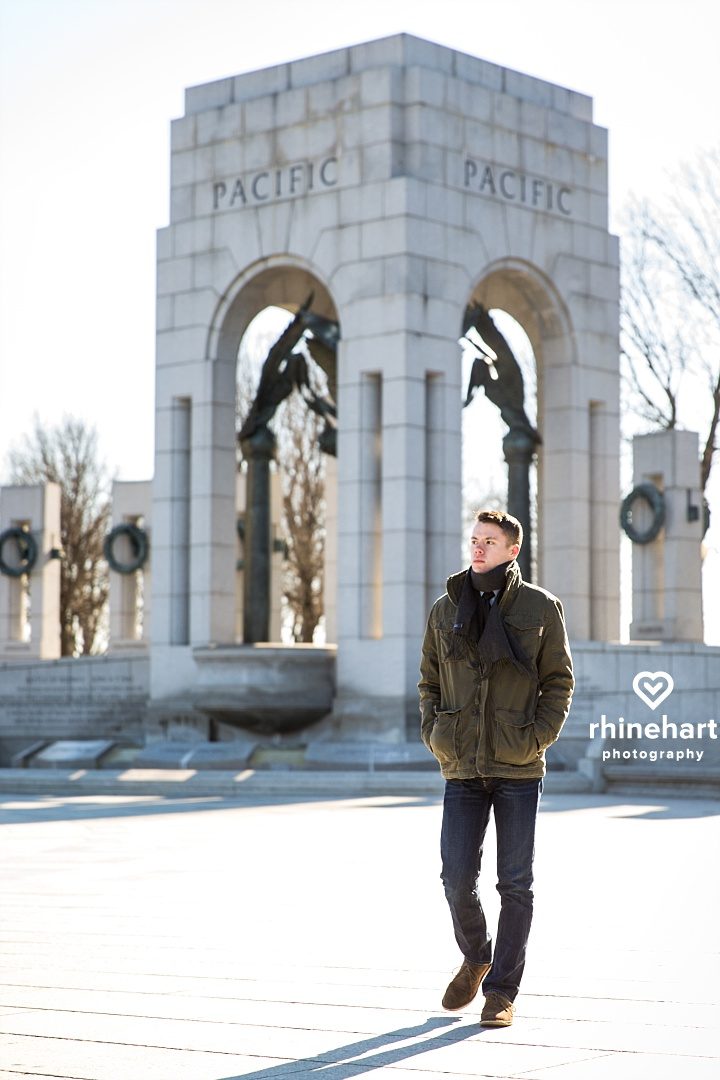 Nick is someone who is kind, optimistic and helpful, he likes to joke around, but has a more serious side. His parents couldn’t get over how “grown-up” he looks here: 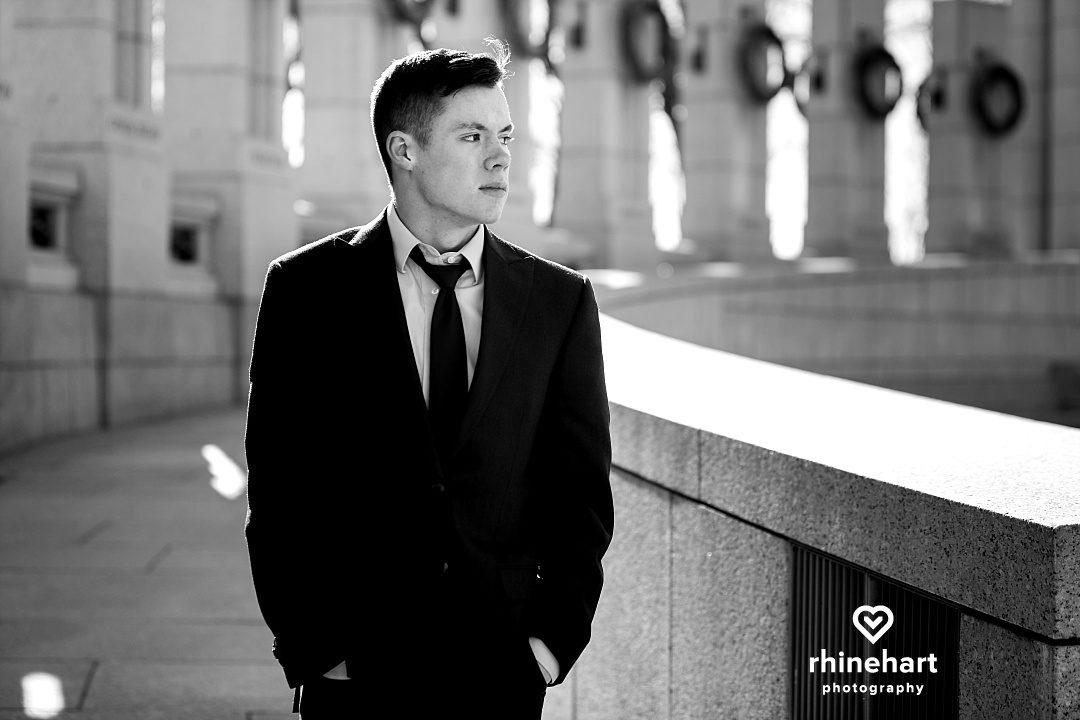 It was definitely cold during our January shoot.  Nick was tough and didn’t complain.  He even *literally* rolled his sleeves up for a few shots!

An up-side to the cold weather was that the fountains at the World War II memorial had been drained and we could get ridiculously close to the gold stars.

They made an stunning background, especially for Nick, who hopes to join the U.S. Navy after college.

This photo gives you a feel for Nick’s pensive, thoughtful side…

We moved from one monument to the next, this time visiting the Lincoln Memorial.  Not only is this a National and political icon, but is also is masterfully designed and dramatic.

Rather than having the monument dwarfed with Nick in the foreground, for this image I chose to show it’s remarkable almost imposing size…

Nick changed from his suit into more casual clothes.  It enabled us to really capture a whole different aspect of his personality.

He is drawn to a more modern, urban aesthetic and we found this large beam with steel rivets in Georgetown.  If you ever need an album cover, Nick, I think this will totally work 😉

Nick is a huge coffee lover, so stopping in Malmaison, a hip Georgetown coffee shop, was a perfect fit for him.

While much of the emphasis of his senior portrait session was on capturing his surroundings and personality, we also made time to capture a few more traditional images as well.

When I captured this image, I was thinking it would be perfect for a print for friends or family members.  It almost has a 1960’s vibe, right?

I got more creative with this photo– it is of his reflection through the coffee shop window.  I like the vibrant colors and believe it captures his pensive, introspective side…

This is the portrait Nick’s father chose to display in his office.  I really like it, too.  Nick in his natural state– relaxed with coffee cup in hand.  There is something understated yet dramatic about it and I really think it captures him so well!

Nick thanks for choosing me to capture your senior portraits!  It was such a pleasure to work with you and your family and I wish you all the very best with your future endeavors!

[…] we first met, Jon shared, “You did such a great job photographing my brother, Nick, a few years ago, so I really knew you’d do a fantastic job with my senior portraits.  You […]